I have never seen one of these before- but can you imagine what a nice home you could make out of this?

Don't know what issues you might get into trying to back this up- I would guess that it would be about the same as backing a trailer up with a regular truck.
Top

Thats the same one Mike posted. But before I think it was $10,000 The listing had no real info and only a few photos.

I wish I had that engine in my TV truck.

IIRC there were originally two of those built but neither one was built by Crown.

Again, IIRC, the idea arose when someone had two buses that had been in accidents, one in the front and one in the rear.

Since it has held together for more than 40 years I don't think you would need to worry about reliability issues.

Driving and parking would be no different than any artic transit bus.

The hard part would be finding spots long enough. 60' is a long vehicle, particularly one that doesn't break apart in the middle.
Top

The first time I saw a articulated bus was about 6 years ago in Houston, it was on the loop, I even bypassed my exit just to take another look at it, this one was a newer model and was in passenger use for Houston. after living in a 35 footer, I would get lost in something that large, its almost double the length of what I have now. I looked at a new bus that was in transit at a truck stop. it had a deasil engine generator powering electric motors for the drivetrain, and sure was nice. I bet those accordion type connectors would be expensive to replace, but loved the way it was just a round turntable inside on the floor. Those type buses would make a nice motorhome but awfully expensive.
James in da GRAYDAWG
I ONCE WAS A MIGHTY GREYHOUND
I THEN GOT OLD AND RETIRED
I LOST MY SEATS AND GOT A NEW GIG
I AM NOW A HAULIN SOME OLD DAWGS &
I BECAME THE GRAYDAWG
Top

according to the seller (from my earlier thread), this was the only one built by Crown in 1958..unknown if other builders built 'benders' the same year or earlier/later..

I go back to what I said.

Crown never made an artic.

I don't recall the name of the guy who made the Crown artic but it was all done in his shop long after the coach left Crown.

He did a great job since it looks as if the factory made it.

It would be interesting to see what the builder plate says in that bus.

But the fact still remains Crown never built any artics.

And that includes the Crown Ikarus artic transits--Crown imported partially built shells and then put the running gear in them. They were not really a Crown Supercoach in any respect.
Top

no prob Mark, just trying to get the definitive answer..

I saw the same bus in discussion on the Crown Junkies group at yahoo and posted the question below along with the responses it generated..

I'm on another forum with folks saying Crown never made these, that they were
'kit-bashed' from 2 other crowns. The term below CCC means what? Any other info
regarding the legitimacy of this rig? I know the seller advised in an email to
me that it was the only one built that year ( he didn't say it was built at
Crown and I didn't ask.. Anyone in contact with the seller? maybe he can post a
build plate photo or quote the info from it.. Sorry, I'm getting into this
discussion late.. 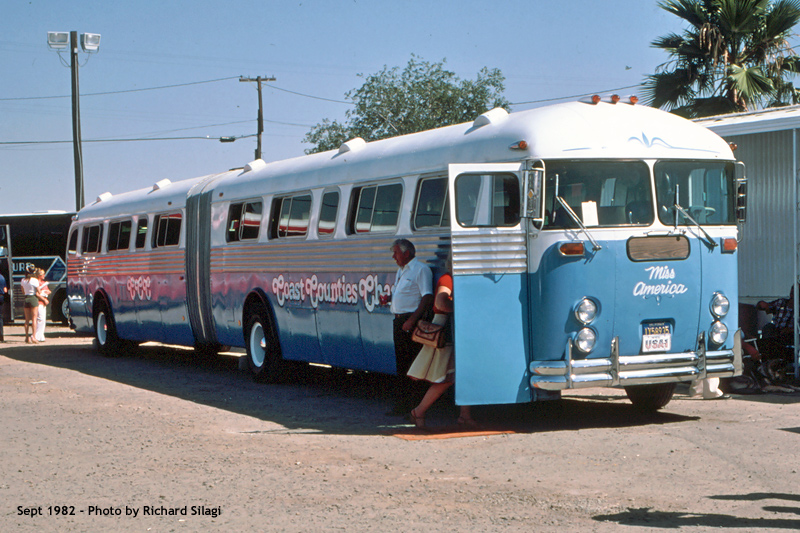 Thanks again, Richard, that's Fred, the builder, next to the bus. He owned Coast Counties Charter in Campbell, CA and later moved the buses to 10th St. in San Jose. This bus, the 1st that he built, was donated to a church in Lodi some time in the late '80's and sold in the early '90s. A for sale ad was in one of the Crown Firecoach Enthusiasts newsletters at that time. It disappeared for a while, until in resurfaced in Utah a few years ago.

Fred's still around, living out of state, and he was at the ATHS show in Pleasanton last year with one of his antique trucks. He did all kinds of "kitbashing" over the years, and his son has Fred's '67 Crown 35' HPO that's converted to a motor home. The HPO showed up at the 2001 ATHS show in Reno.

This has been a very interesting and informative thread

It's too bad that Crown did not build something like this bus themselves, it would have been really nice! It must have quite a project for Fred to build, I have to admire someone with that much drive and determination to get such a complicated job done

We need someone to build a really nice double decker articulated bus- think of all the floor space you would have!
Top

There is the 60' jumbo liner out there

This bus, or one exactly like it, was parked up the street from my bus in Oakland, Ca. It's HUGE.I'm not sure if these were highway coaches but it still had utah plates and that must have been one hell of a trip to drive it home. I hope he's doing something cool with it. The last I saw it, it was parked in storage taking up 3 spaces.
Top

Hi, I just saw this thread, looking up some history on... my bus. And yes, it was a hell of a drive from Utah. Not even an air seat in this thing. And with no weight it in... Let's just say it's a pretty jarring ride. 10 speed manual no less. On the 17 coming through Santa Cruz. Good lord. Haaaaaaaaairy!

Yes, it's parked in Oakland now, and covered in graffiti for the time being. A new paintjob awaits it, as well as a home on the road with a travelling road show, god willing.

Thanks to all for the history lesson. I'm doing a little write up for it now for a local bus club magazine.

Thanks for being here!
Top

I hope you come back and post more about your adventures with that artic bus! It's really cool.
Top

old thread but just came across this info..not a crown but still a 'bender'..