Thanks for the update .

That Chevy bus is fabulous , but seriously , you have to learn how to fix it yourself , or you will go broke. Keep asking questions and we will try to give you good direction .
58 Bedford House
Top

I have had some free time during the holidays to work on the bus. I was thinking about how I could safely test the propane system. I read that I could use air to pressurize the system to about 4# and see if it remained pressurized for a day. I started gathering the gauge and pump and thinking about fittings. Then I decided to just go for it and open the valve on the tank. I took a spray soap bottle to the connections I could see and sniffed around. I did not detect any leaks with the soap or my nose. The wall heater has a piezoelectric clicker in the valve. I can get it working however it is hard to tell if it is on other than feeling heat and seeing a few glowing strands. The piezoelectric wiring is melted on the range-oven so I used a lighter. The stovetop burners work, but the pilot is missing a cap. I'll need to fix that since it is on with the stove on. The oven works. I lit the pilot and there is a second pilot that cycles with the temperature to light the burner. It is a Ward and Son Model 810-487. I found a manual on-line, it describes how the oven pilot works. There is also a socket for a lightbulb in the oven, but I haven't gotten to that yet. How am I going to clean the stove? I removed the grills and the top. I would like to remove the entire appliance and pressure wash it, but I'm not sure I wan't to dig that deep. Any suggestions how to clean the rusty surface under the burners? The dometic fridge uses flint for spark. The controls are on the front, but the action is in the back. I'd like to be watching when the flame is lit. I may need a helper with this one. I'll need to open the valve until the pilot heats up the thermal valve. Is there any way one person can do this? The water heater will have to wait until the spring. I don't want to put water in the system in this freezing weather.
I also spent some time on the bus lights. The headlights came on with the switch, the turn signals did not. I couldn't find much documentation about the turn signal components, the Grote 966-4 switch and the Buss 550 flasher. I went through the turn signal circuit and created my own document. I don't know how to post a pdf here. I could post it as 6 jpg images if anyone is interested. btw I did get the turn signals to work. Next- I'll get the fuel gauge working!
Top

There doesn't seem to be much traffic on this site, I'm o.k. with that. I have decided to post the images that describe how I troubleshot the turn signal circuit in the bus. The thumbnail's are small but link to the image hosting site. 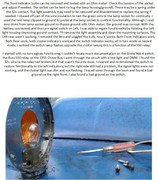 Thanks for the update , it's great to see the progress happening (unlike at my place)

Good to see the traffic! Like Dusty said...good to see someone making progress!
Top

Good to see progress and please keep posting on this special forum. I look every day for new stuff and also try to post when I have something to say. Thanks, Jack

I noticed this site went down, I’m glad it’s back. I did a bit of camping out of my conversion van this summer, and went to the lake cabin in Montana for a couple weeks in July. I’m keeping busy at my day job and work on the bus when I have time. I have the conversion van up for sale, but keep on using it. May go camp at the beach next weekend. When it sells, the bus will be the camping rig. Here’s an update:
I determined the fuel gauge works, and the sender. I disconnected the sender from the gauge to test. The gauge swings between full and empty with that terminal grounded or not, I also connected a potentiometer and adjusted between 0 and 300Ω to see the needle movement. I then measured the resistance of the sender, put in about 10 gallons of gas and measured again, it changed some. I re-connected the sender to the gauge, not much movement, but it’s a big fuel tank. I really need to get the bus on the road, I moved it over to another parking place, closer to the end of the extension cord. I ran the fridge on A/C and my beer got icey, it works well. I was having trouble with lighting the propane, so I put a fuller tank on, but it still wouldn’t light. The propane tanks are in a cubby under the back, they lay horizontal. I recently read about the difference between verticle and horizontal tanks, so I placed the tank on a stand next to the bus in it’s verticle position. I was able to light the fridge, first with a lighter, and then with the flint from the inside.
I’m redesigning the electrical system. I have gone through the existing system so I know what I am working with. It is set up for boondocking, one wire from a relay-on with key-to charge the house batteries. There is an on demand water pump and four lights. Two lights are on house batteries with switches at the light. Two lights are on bus battery with switches by the driver. There is an A/C plug for the 2-way fridge, and 120v light sockets in the oven and range vent. There is no roof vent for the range or fridge, so I’ll add one at some point. The roof air is also A/C 120v.My plan is to install a power center with charger and distribution panel. I ordered a Parallax 6730D power center yesterday, so I’ll have lights soon. I’m not sure how, but I want to move the two light switches from the driver panel to near the lights. I’ll either run all new wire, or run new wire to the switxch panel and tap into the existing wire going to the lights.
I energized the waterpump, it works, but I wanted to test the pressure switch, so I connected a water hose. A waterfall! The water heater tank had split, it happened awhile ago and someone had mad a nest of fiberglass. I located a replacement tank and installed it, but the controller threads kept leaking, I also found a leak behind the toilet. I put plumbers paste on the controller threads, but haven’t tested it yet. I removed the toilet and found it has a quick connect, so I didn’t need to remove it. The quick connect leaks, so I have a new valve on order. I also found the black water tank full. At least I know it holds. It’s empty now, good thing it’s the rainy season.
My next task will be to re-install the toilet and get the water system under pressure. Check for leaks, test the water pump pressure switch, test the water heater. I hope to accomplish this before any freeze. I will also install the power panel and get some lights working. Eventually I’ll install a shore power recepticle.
Top

Best post in a long time! Thanks! Won't ask about how the black tank got emptied--Wify still blames me for the death of our willow in the patch where I cleaned out my new to me black tank--after dark. Ha!

We'd all like to see a few pics of your project. Since Photof--er--bucket went sower I've been using Postimage.org. It is still free and it is easy to use. Jack
Top

Quick little thread drift here - has anyone used Flikr for photo site? Hard to tell if they let ya do this type of link...I suspect maybe not..?? Since smugmug bought them, am curious to know what is going on with them from someone with direct experience.
Top

Since photo f----er-- bucket started jacking everyone around I've been using Postimage.org. It is free and easy enough to use and allows for direct posting here on nomadicista. So far so good. I don't save my pics anywhere but on my own computer and even that I back up regularly--but then what do I know, Ha! Jack
Top
Post Reply
25 posts

Users browsing this forum: No registered users and 4 guests